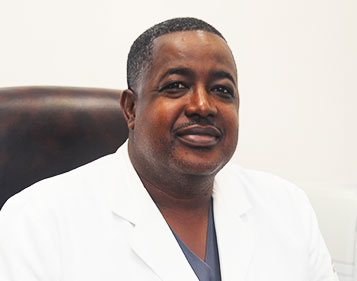 He was born in Nassau, but his family moved to Freeport while he was still a toddler.  He attended Hawksbill School from grades 1-9, and Freeport High grades 10 -12. After graduation he went to Montgomery College in Maryland and then transferred to University of Miami.  During his undergraduate years he was inducted into the Phi Theta Kappa National Honor Society, as well as an All-American Scholar.

After receiving his Bachelor’s degree in Biology at UM, he worked here at the Rand Memorial Hospital within the Laboratory Department from 1987 to 1989. His stay here solidified his desire to become a physician.  He attended Howard University Medical School from 1990 to 1994, where he received his Doctor of Medicine degree.

He then did a residency in Internal Medicine at Albert Einstein Medical Center.  Upon completion of this program he received the Library Award for Outstanding Achievement in Scholarly Activity.

After completion of residency, he went to the Washington Hospital Center where he completed a fellowship in Cardiology and was extensively involved in clinical cardiac research.  While there he was an Attending Physician on staff in the Department of Internal Medicine.  He is also a Diplomat of the American Board of Internal Medicine, as well as Cardiovascular Diseases.

He joined the staff of the Rand Memorial Hospital in September 2000, as a Consultant in Internal Medicine, and is currently the Chief of Internal Medicine. In July of 2000, he established the G.B. Cardiovascular Center. He later went on to establish the Medical Pavilion in 2008, which has grown to become a multispecialty clinic, offering a wide array of medical and dental specialties and services.  In all however, his most proud accomplishment to date are his two kids, Rane & Winston II (aka Fritzie), resulting from the union with his beautiful wife, Dr. Russanne Franks-Forbes.